Late last year hobby games maker Fantasy Flight Games announced Star Wars: Rebellion. Creating a big strategy game in the Star Wars universe alone would get tabletop fans excited, but what pushed Rebellion to the top of many most-anticipated lists was the fact that it would cover the original trilogy and be designed by, part of the team responsible for the extremely popular tactics game.FFG recently sent Polygon an early production copy of the game, and I've had it on the table for the better part of a week. Here's my first impressions of one of the biggest board games in Star Wars history.Rebellion is a massive package. Retailing for $99.95, it comes in one of the deepest square game boxes I've ever seen. Inside are two massive game boards, two side boards, dozens of cards and counters and over 150 plastic miniatures. There's a lot going on, and my first 30 minutes or so with the product was just punching out chits and bagging everything up so I could make sense of it.

Then it was another hour to set it up for the first time.The objective of the game is fairly straightforward. The Rebel player must win the hearts and minds of enough citizens to overthrow the Empire, while keeping their base hidden from the Emperor and his vast fleets. The Empire has to find the Rebel base and destroy it.In motion Rebellion is dauntingly complex, but it boils down to two major gameplay systems working on top of one another — characters and combat.To perform an action anywhere on the board, players must move a character from their sideboard to a star system on the map. On a given turn Princess Leia might go to Mandalore on a diplomatic mission to gain support for the Rebellion, and then Grand Moff Tarkin might journey to Corellia to oversee production of a Super Star Destroyer.

Board Games For Kids

To counter those actions, additional characters can be moved to oppose them. A quick role of the dice determines if they succeed or not.When each player at the table has run out of characters, they've essentially run out of moves and the round is over. But over the course of play, more and more characters flood onto the table.

The moves and counter-moves, missions and immediate actions become more elaborate and complex as the game goes on. Add to this the Empire's nasty habit of capturing Rebel characters when they're on the map, and there's an excellent kind of tension at play that feeds directly from the lore of the Star Wars universe.Throughout the game Han Solo, Luke Skywalker and Darth Vader are all doing the kinds of daring, foolhardy and evil things they should be doing and their adventures move the game along relentlessly. This character play alone would be a satisfying experience at the table, but below that system sits a fairly intricate tabletop wargame.Characters don't just run missions, they can also be used to rally units and begin combat. Place Emperor Palpatine on Dantooine, for instance, and he is able to bring in forces from multiple adjacent systems to fight the Rebels he finds there.The most relatable example would be something like Axis & Allies, but it's actually slightly more complicated than that.There are two theaters of combat — space and ground, and each has their own units.

When entering a system space units must fight their way in before landing ground troops, and once on the planet's surface players have to destroy all of the enemy's ground units there before taking control of the planet.The actual dice mechanics get a little murky, however. Each unit is only susceptible to one type of damage, either black damage or red damage.

Some units do one kind of damage or another, and the rare units do both. The dice themselves have the ability to deal critical damage, which can be assigned to units regardless of type, and there are tactics cards in play during each battle that also allow for certain damage rules to be broken.Overall combat seems needlessly complex. The miniatures themselves are simply stunning and run the range from detailed Rebel troops and Stormtroopers to the Second Death Star itself, and moving them around the board is a pleasure. But keeping track of which rock beats which pair of scissors was draining at times.Where the game excels is in modeling the kinds of combat scenarios that were common in Episodes 4-6. The Rebel player almost always feels overwhelmed at the sheer destructive power the Dark Side has at its disposal, while the Empire can rough the Rebels up but only rarely do they get the chance to pin them down and destroy them in detail.Game setup also has a lot of randomness to it, and a tendency to begin the fight in medias res just like the movies do. For instance, at the very start of my third playthrough an entire Rebel fleet was cornered on Naboo. In the very first round of play my two capital ships were engaged by swarms of TIE Fighters, two Star Destroyers and the Death Star itself. 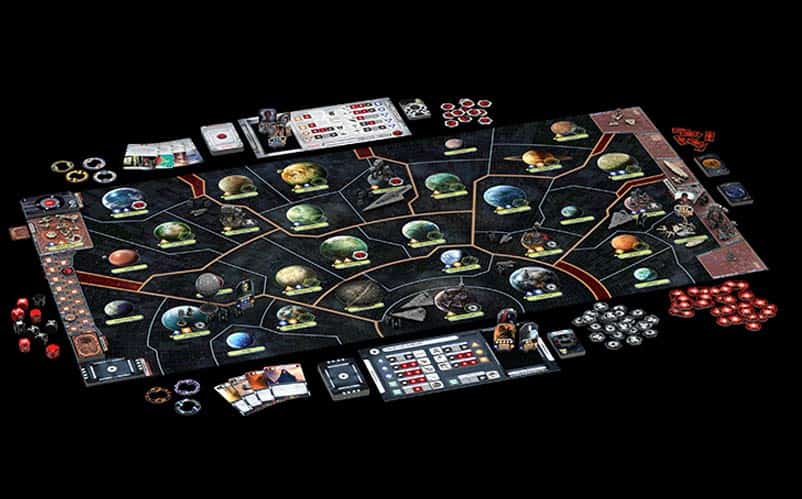 The Empire played a card that prevented me from retreating, and my total forces on the board were reduced by 60 percent in just a few salvos.Charlie Hall/Polygon Rarely do all the units involved in combat actually fit in the space before combat begins. They'll either retreat, or be destroyed.But with my very next move Mon Mothma herself launched a daring mission to start a local uprising on Naboo. After a crushing defeat resistance fighters threw off the yoke of the Empire with just a handful of troops and returned the system to Rebel control.When Rebellion isn't being dramatic and tremendously satisfying, however, it's driving me nuts with tracking down the minutia of its rules. My biggest complaint with the game is the documentation, and for an experience as fiddly as this one is that's a big problem.Put simply, the rules are neither clearly explained nor conveniently located.Inside the box are two manuals, a Learn To Play guide and a Rules Reference. The first time you play the game you use the Learn To Play guide, setting up a pre-configured scenario with the Rebels and the Empire in more or less fixed positions on the board.But you're not done with the Learn To Play guide after that first game, because the rules you'll need to play going forward are buried in there as well.

FFG seems to understand the issue, and that's why they've included the Rules Reference. But that volume is actually bigger than the other one! And its so poorly laid out as to be almost entirely unhelpful.Bad manuals can't ruin games.

But they sure do try.To track down answers to simple rules questions I literally had to read the length of the Learn To Play guide, then check a reference in the other manual, and then return to a different section in the first manual multiple times each time I played. Even then I was never really sure if I was doing it right.The solution, in my opinion, would have been to make the Learn To Play guide disposable. Throw it out when you're done, and then crack open a third manual — the Actual Play guide — which would clearly tell players step-by-step what to do to play the game.It's not all doom and gloom, however. Bad manuals can't ruin good games, and Rebellion is a good game. I want to play more of it, and I want to play against a skilled opponent.

But before I dive back in for another 3-4 hours at the table I'm going to wait a few months for some downloadable errata from FFG, or a proper user-generated manual from the community at Board Game Geek. Right now Rebellion is more frustrating than it should be, and for a game with this much potential that's a shame.For more tabletop coverage, see Polygon's dedicated section.Check out the debut episode of, a podcast about celebrating the games we play.

This week's episode focuses on Astroneer, a game about astronauts trying to survive and thrive.