A sort of in depth guide on what I think about the field medic perk, skills, weapons, and more.Other KF2 Guides:.IntroKeeping your team alive is essential to Killing Floor 2 and sometimes that puny syringe will not save your team. Fahrenheit and I will try to teach you how to become a somewhat acceptable field medic. Let's begin.Basic PlaystyleFirst thing first, the name of the perk is called field medic.

True there is field in the name but we aren't talking about that one. Your main job is to be a medic. That's why your team was yelling at you to switch to it! Don't go wandering off by yourself because chances are that someone is going to need healing and what's going to happen when no one is there to heal them? That's right, THEY DIE! And we don't want that happening.WeaponsLike I said in my gameplay basics guide (which is really outdated, maybe I should do something about it.) it is always better if you stick to your perk weapons.

Well medic is an exception because when leveling up medic, your weapons don't get any extra boost. I don't know the actual names for any of the guns so I'm just calling them what I want to call them.:PStarting Pistol: Just like in Nazi zombies this pistol is really only there so you can get them points. Unlike nazi zombies you can have more than 2-3 weapons and the weight of this gun is only 1 so it's always good to have one if you are at 14 weight. The pistol is only slightly better than the 9mm without skills that boost your damage (but we'll get to that later).SMG: Just like the in game description this is literally just the pistol but on steroids. The SMG doesn't heal faster/better/more efficient than the pistol unfortunately.Shotgun: Probably the most underrated of the medic weapons. The shotgun is great for clearing large ammounts of zeds and is pretty reliable at killing large zeds if you are in a pinch. Without any damage buffs the gun lacks damage though.

It is mainly used for the bonus dart efficiency and as a secondary when your assault riffle is out.Assault Riffle: This is THE medic gun you want. GET THIS OR ELSE.

The dart regen is so good and with damage buffs this is a pretty good scrake killer and without buffs it's an extremely efficient trash killer.SkillsEvery 5 levels each perk will get new skills. These are the skills for the medic. Just like the weapons I don't actually know the names for any of these despite playing medic a lot. Don't bully me for it tho.Symbiotic Health V. Resilience: This is the main part where medics choose their playstyle. Resilience give extra resistance with missing health and Symbiotic Health gives +25 health and whenever you heal an ally you get healed 10%. 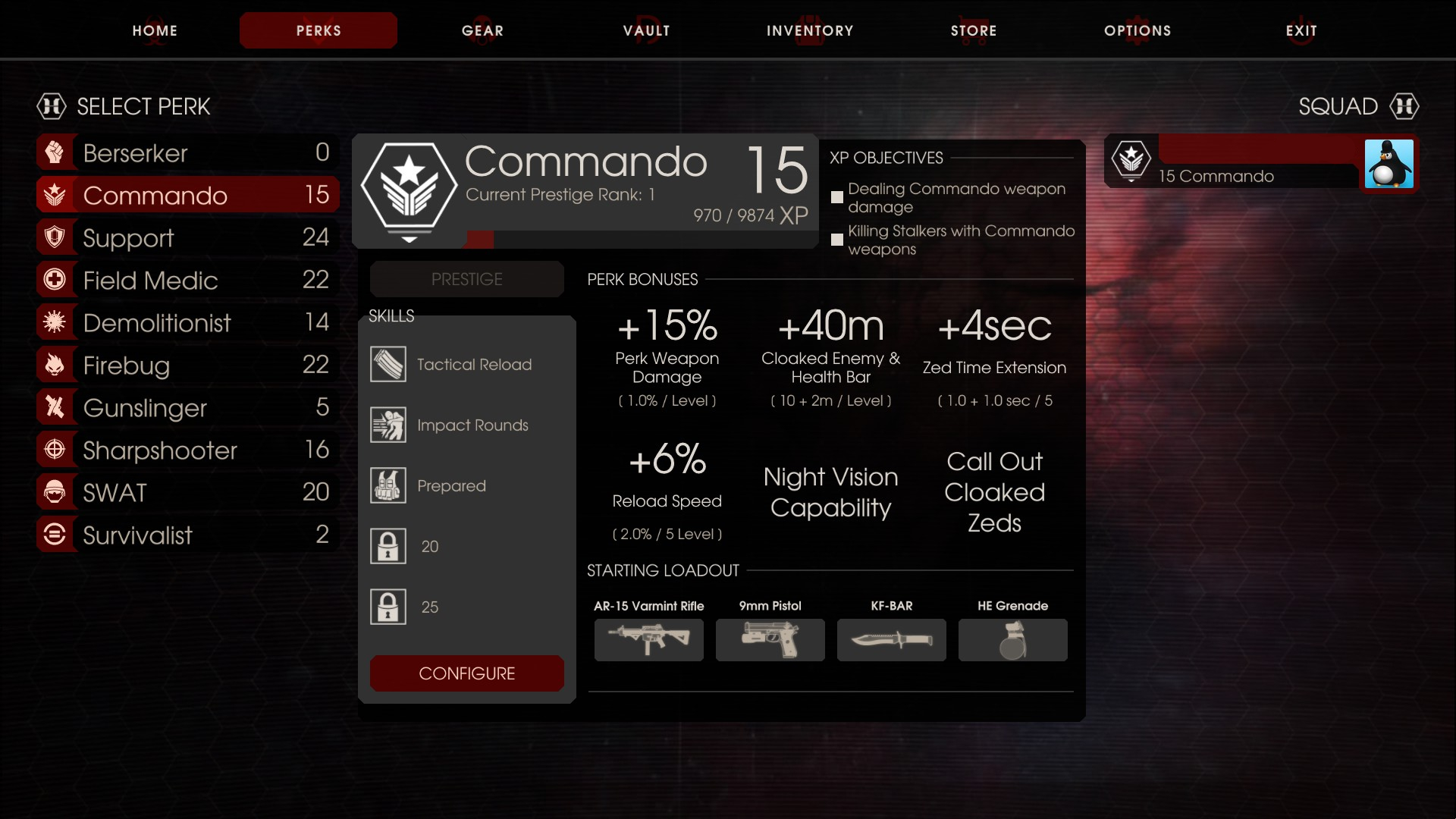 Symbiotic health is good for medics who mainly heal and don't want to monitor their own health at the same time. Resilience is interesting because there is a strategy where medics (especially at lv 25 with 175 armor) buy armor and get themselves low on health to keep their armor up. Symbiotic health synergizes with future skills (that we'll get to) and Resilience is good for medics who are solo or the last one alive (trust me, it happens more than you might think).Adrenaline Shot V. Combat Doctor: Adrenaline Shot synergizes with symbiotic health and will give yourself and allies a 10% speed boost for 5 seconds per heal (up to 30%).

Combat Doctor gives a pernament 10% boost to speed and a 50% extra mag capacity. Adrenaline Shot is really useful because not only is the boost stronger but it also gives it to teamates. Combat Doctor is also pretty good mainly for the extra capacity. Some people swear by the 10% and say it gets them to their team faster but I can tell you from experience that the mag capacity is the main reason why I think it's on par with Adrenaline Shot.Cogulant booster V. Acidic rounds: Cogulant booster gives anyone healed (including yourself)a 5% boost in damage for 5 seconds (stacking up to 20%).

Acidic rounds are interesting because it makes all perk weapons inflict poison damage. Poison deals up to a maximum of 3 damage per second (without buffs). Pretty impressive right? Yeah you're right. It's not very good.

At least not yet. Poison also distracts zeds like fire.

It can panic some zeds and inturrupt their abilities.ZED TIME: Airborne Agent V. ZED TIME: Zedactive: Airborne agent is a clear winner no doubts. All medics can agree that airborne agent is too good (even solo). Airborne agent releases a healing gas (like the medic grenade) around you so you can just run past teamates and heal them. Just like a medic nade you can damage zeds with it and on most difiiculties you can go waves without shooting and still get kills just because of this skill. Zedactive is too underwhelming.

It claims it deals 'Massive' poison damage but like I previously mentioned, poison is only good for distracting zeds so acidic rounds would be good enough if you even want poison. It also says it slows zeds but honestly I've never noticed it with my time using the skill. It's just better to use airborne agent.Personal PreferenceKeep in mind that this is my personal preference on how I play the perk and this isn't me telling you how to do it right.Basic playstyle: When using the left side of the skills I take care of trash zeds and heal teamates. Medic nade is super good at giving everyone buffs fast and when in a pinch I use it to get the bonus damage against large zeds. With the right side I am a do it all medic. I take care of any zeds even large ones. I normally do the armor strat with this side as well since I am acting like a commando and just sitting in the back.What I think is 'Better': I am pretty familiar with using both sides of the perk but I think that the left side is better than the right.

Left side applies heals for yourself and giving damage to you and someone else it better than giving yourself damage (even though you can stack the two for 40%). Left side is a lot easier to manage than right side, for new players and veterans alike. Right side is definately harder to manage but it makes you more than 'just the medic'.

The poison on the right side is fine but if you are able to make a demo one-shot scrakes the poison doesn't even matter.Weapons: I ALWAYS go with all medic weapons even though it is good to get other stuff from other perks. I know that there is some stuff with medic with pulverizer for a large zed killer and one with a crossbow for stun instead of shotgun for stun but I personally like the shotgun for the heals and because it's satisfying to use and because I have never tried any of the other ideas yet so I'm not the guy to go to for weapon choice.

Maybe you could read up about the Argonian race on the internet, to develop you interest in the race as a whole (I personally enjoy playing as an Argonian.) I recommend reading about the lore of the Shadowscales.Base link for lore on Shadowscales. Sadly, there is no way to change your character's race mid game, without starting over.There are methods of changing your race as well as various other features of your character, but they're only available for the PC version of Skyrim.I assume you play in 3rd person mode, as you find the tail to be quite annoying. Skyrim how to change race.